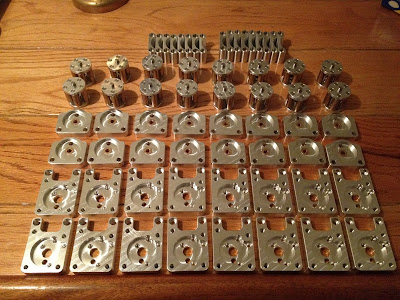 Peristaltic Pumps are not new, they are pumps that mimic peristalsis, a biological mechanism most commonly depicted as the muscle contractions of a swallowing esophagus. The vast majority of these pumps serve the medical and pharmaceutical industries. This does not bode well for hobbyists because the pumps are priced at an average of $300 each. When attempting to build a cocktail machine that dispenses over a dozen liquids, the cost becomes prohibitive. "Why use a peristaltic pump in the first place?", you might be thinking. Well, for many reasons. The first and most obvious reason is maintenance. Since liquid does not pass through any moving parts, it becomes easy to swap out or clean hoses when necessary. In the same vein, reliability. Syrupy liquids like grenadine and Bailey's tend to gum up mechanical pumps and valves pretty quickly. Sanitation then becomes another issue when liquids become trapped in the crevices of a mechanical assembly and become impossible to clean. Finally, accuracy and simplicity are the final components that put the nail in the coffin on other approaches. While gravity valves and simple diaphragm pumps are a possibility, there is still a big issue with dealing with different densities and viscosity of liquids. Since peristaltic pumps are positive displacement, meaning they dispense the exact same amount of volume with every revolution of the motor and gearhead, it simply becomes a software problem to account for the number of motor rotations for accuracy. This is much easier and cheaper than fashioning some sort of flow rate meter. When designing the pump, several factors need to be taken into account such as the occlusion of the tubing, the ease of assembly/dis-assembly of the tubing, maintainability and modularity. The picture shows the parts for the first batch of peristaltic pumps I made. There is a plate that the motor mounts to, a hub with sleeve bearing rollers, a shoe which is replaceable and provides the right amount of occlusion, and a support for the hub that prevents lateral motions from causing it to run to eccentrically. All in all they can be built for under $100 given the right amount of tools and resources.

Where can I buy the motors for this pumps? How much did they cost?

These are some of our original peristaltic pumps that we designed and machined out of aluminum.

What is it that is pictured here? Are the mold casts or actually part of the finished product?

Could you please post a picture of the pump?