Ever since the first cocktail was poured people have been searching out ways to do it faster and with better accuracy. Millions of dollars are spent every year on the newest bartending gadget or gizmo. Then, when robot technology started to become more accessible people began tinkering with the idea of creating a robotic bartender. We’ve seen them in movies, but how close are we to actually having one at home to make us that perfect drink? Well, probably a lot closer than you think. Party Robotics has been working hard for the last five years to bring a simple, fun robot that dispenses delicious cocktails into the mainstream marketplace. However, we’re not the only ones out there creating bartending robots. Let’s take a look at what else is available in the world of drink bots.

In the commercial world you really only have few options. One is the RoboBar, manufactured by MotoMan. With a pricetag of $160,000 this behemoth of a bot is not exactly feasible for home bar enthusiasts. RoboBar is serious about giving people the robot bartender experience and comes equipped with a lifesize robot; dressed in a tux and featuring a male or female personality. This bot is not designed to assist bartenders, but replace them, touting that it can “work 24 hours a day, 7 days a week without breaks, vacations, holidays, or sick time (or hangovers).”

Another bot that is available to purchase right now is the Virtual Bartender from Digital Beverages. This is a bot for those with money to spend and the space to set it up. The Virtual Bartender weighs in at 350 pounds, is about the size of a large dishwasher and requires a drain, and hot/cold water line connections. Much like the RoboBar, The Virtual Bartender has a LCD touch screen and can deliver a wide range of drinks, boasting it can hold up to 32 different ingredients. Adding one of these bots to your home will set you back between $5,800 - 7,500.

Next we get into the world of diy bots which are not available for purchase at this time. The first is The Inebriator. You may have heard of this guy as he gathered up a bit of publicity on the interwebz back in September of last year. The Inebriator is an Arduino powered cocktail machine created in the UK by Ian Cooper and Jake Osborne. The bot holds nine liquor bottles upside down on the upper level and stashes its mixers in a custom cooler down below. Any mixers need to be moved from their original bottles into plastic containers which have been plumbed with two pipes, one leading to a gas tank and the other to a valve. Drinks are ordered from a special controller box and a glass then moves under the bottles along a conveyer belt. The bot can dispense a drink in about 30 seconds, depending on how many ingredients it contains. 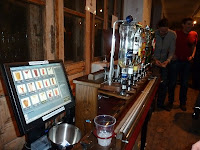 Another bot which is quite similar to The Inebriator is MELMACC. This cocktail dispensing machine was built by Oliver Höftberger, Robert Neuner, and Michael Mueller. The bot also utilizes the conveyer belt design, though does not have a gas tank or separate cooler box for mixers. Instead the mixers sit in their own special containers next to the alcohol. Drinks are also a bit slow to come from MELMACC, clocking in at about 40 seconds. There are several other fun little speciality bots out there which make appearances at events such as Roboexotica and BarBot. There is Layerbot which uses peristaltic pumps to create layered shots, Robomoji that crafts mojitos, and SoBEaR, the breathalyzer/booze dispensing teddy bear. As you can see there are lots of projects and attempts at delivering an amazing robot bartender to the masses. Our own creation, Bartendro, is going to be making its debut on Kickstarter soon and we’re hoping that it will meet all of your home bar needs. The newest models are lightweight and can easily be carried by one person, uses peristaltic pumps to give the most accurate drinks possible, delivers those drinks in less than 10 seconds, has an interactive user interface which can be run off your smartphone or tablet, is easy to clean, and most importantly makes delicious precision cocktails (or crazy custom juice creations). If you want to check it out in person we’re going to be at Robogames’ annual BarBot event in San Francisco on March 1st and 2nd. Come on down and let our bot get you drunk!!

Hi Derek! I’d love to see some photos or video of your project :)

We’ve been working on carbonated liquids and believe it’s a solvable problem.

The Bartendro 7 and Bartendro 15 will actually ship with custom caps so that people can close the bottles when it’s setup.

Cleaning of the lines is super simple and just run sanitizer through at the end of the night.

You can get one pump and board for $99. Check out the Kickstarter for more information!

I made a drinkbot once for my college senior design project. That was 5 years ago, it was entered in and won the engineering expo.

16 different liquids in custom bottle holders inside a modified refrigerator. Used CO2 to push and solenoid valves controlled by 2x 8-port relays to control the amount of liquid dispensed. Also accurate to within a mL.

I’m diggin on your project, but the peristaltic pumps were something I shied away from for not being able to dispense carbonated liquids. Also, it would be nice if you could seal your bottles, so this isn’t a setup and tear down every time you want to use it.

Also, how are you handling cleaning of lines? Just hooking up a bottle of cleaner each time and running it through?

I would like to get involved with the software / firmware side of this and will be watching your github repo. Let me know if there is any way I can get like 1 pump and a board separately.

Bartendro is sexier than those other bots (and I don’t even drink alcohol!)