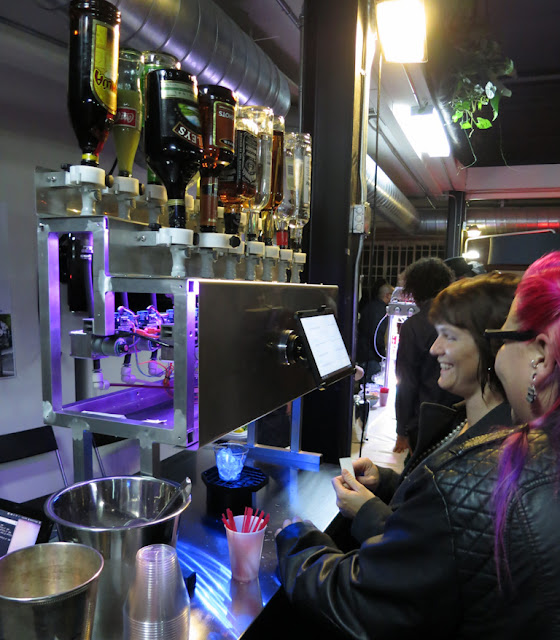 Bartendro's previous shell was made out of stainless steel. Its aesthetic resembled a commercial appliance of yesteryear with its art deco design; shiny, brazen and robust. Many things had been taken into consideration, like the ease of setup, use and maintenance; modularity was incorporated from the outset. However, as we stood back and watched our humble machine get shoved, spilled on and endured all sorts of operational hiccups, our inner engineers knew we'd have to make some improvements. 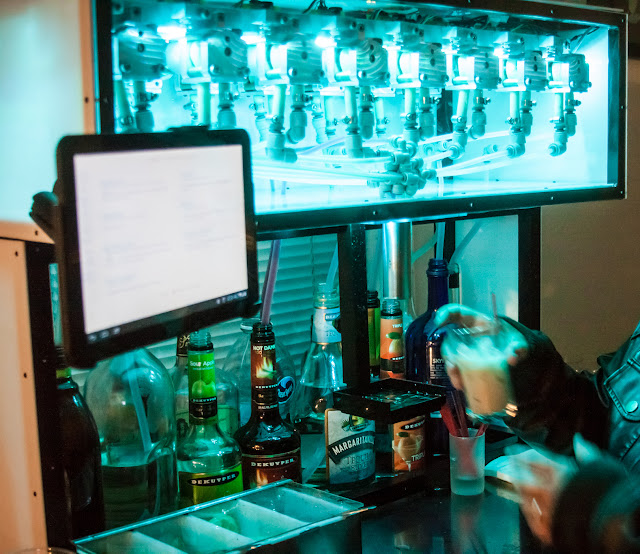 The first thing you'll notice is that the bottles no longer sit on-top in an inverted fashion. That design concept was with us from the beginning because we thought it was the most intuitive. The approach seemed the simplest; just let gravity do all of the work. While cool looking, it was fraught with technical challenges. 1) Flow needs to be measured since gravity will cause pours to be inaccurate due to varying liquid levels. 2) With standard bottles being inverted, air flow back into the bottle is very important to not cause vacuum. 3) The inverted bottles, even with quick disconnects, are not fast to change and are always messy when removed, and are not stable when inebriated people are hovering around and poking at the machine. Secondly, the front is all clear so you can see the guts of the machine. When the bot was enclosed, people would need to walk behind the machine to see what was going on. This just meant that the machine had to sit on an island, which wasn't the end of the world, but it's nice to be able to access everything from the front so that the machine can easily be placed against a wall, taking less space. The new enclosure also reduces noise since the volume with the pumps is encapsulated. Other improvements include, clean tablet mounting so that it's not in the way and won't get splashed on. Adjustable drip tray which allows the glass to be as close to the spout as possible to reduce splashing. Thinner aluminum and acrylic housing to drastically reduce weight. And, the machine can be disassembled into two major parts for ease of transport. At our inaugural party of the new design, we beat our record by dispensing 287 drinks, or 25.8 liters of cocktails in an approximately 5 hour period. Total Drinks Served by Bartendro so far: OVER 1000!!!